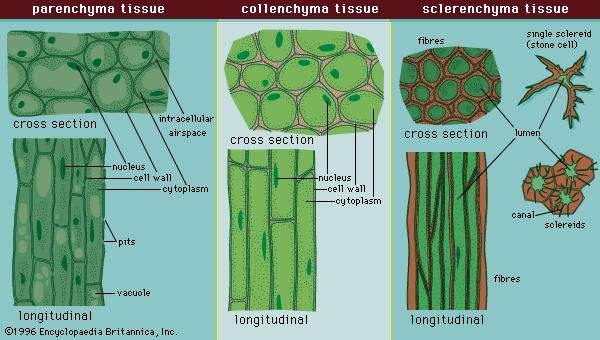 This article we will discuss about 3 Types of Simple Permanent Tissue:- Parenchyma, Collenchyma and Sclerenchyma Tissue

Chlorenchyma
The mesophyll part of the leaves contains chlorenchyma. Chloroplast can be found in these parenchymal cells. Furthermore, these cells can be discovered in the immature plant cortex of the plant’s stem. Multiple intercellular gaps are present in these cells, which are loosely packed. The stem and aerial roots of plants get their green color from chlorenchyma cells. The job of these parenchymal cells is to manufacture food through the process of photosynthesis.

Aerenchyma
The parenchymal tissues are most commonly seen in aquatic plants, where they help the plants maintain their buoyancy. These parenchymal cells are loosely packed cells with wide intercellular gaps where air holes or air pockets exist, providing the plant with the necessary buoyancy. The plant can also use the gases (oxygen or carbon dioxide) trapped in the aerenchyma.

Prosenchyma
These types of parenchymal cells are usually found in the vascular tissues of plants. These cells characteristically possess pointed end and are elongated narrow cells.

Armed parenchyma
These are the star-shaped parenchymatous cells found in the mesophyll part of the gymnosperms (e.g. in pine tree leaves).

Xylem Parenchyma
The cellulose-based cell walls of xylem parenchyma cells are alive and thin-walled. They store carbohydrates, fat, and other compounds such as tannins in the form of food. The ray parenchymatous cells transport water in a radial direction.

Phloem Parenchyma
Elongated, tapering cylindrical cells with dense cytoplasm and nucleus together make up phloem parenchyma tissue. Cell walls are made of cellulose and have pits through which plasmodesmata connects between cells can be made. The phloem parenchyma stores food material and other substances like resins, latex, and mucilage. Phloem parenchyma is absent in most of the monocotyledons.

Depending upon the pattern of wall thickening and cell arrangement and their location, the collenchyma tissues are classified into following types.