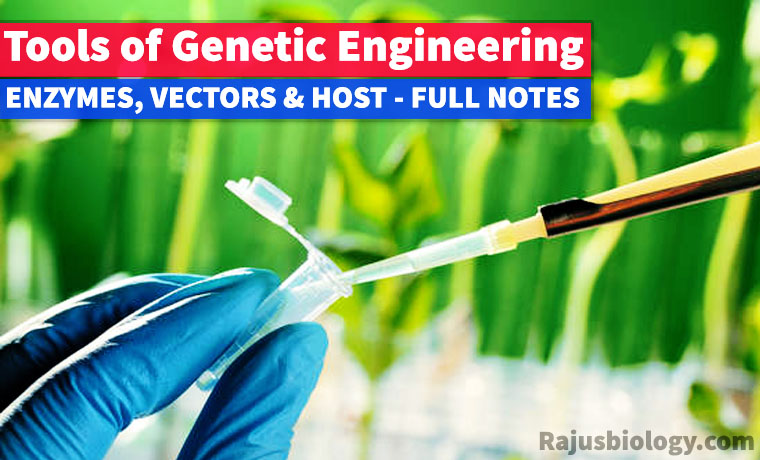 Restriction enzymes, also known as ‘restriction endonucleases’ are molecular scissors that can cut DNA at specific locations. These are part of a larger class of enzymes called ‘Nucleases’. Nucleases are of two kinds:

Hundreds of restriction endonucleases have been isolated from bacteria, and some of them are commercially available. The progress and growth of biotechnology is unimaginable without the availability of restriction enzymes.

Recognition sequence is that the site where the DNA is cut by a restriction nuclease . Restriction endonucleases can specifically recognize DNA with a particular sequence of 4-8 nucleotides and cleave. Each recognition sequence has two fold rotational symmetry i.e. the same nucleotide sequence occurs on both strands of DNA which run in opposite direction . Such sequences are referred to as palindromes, since they read similar in both directions (forwards and backwards). 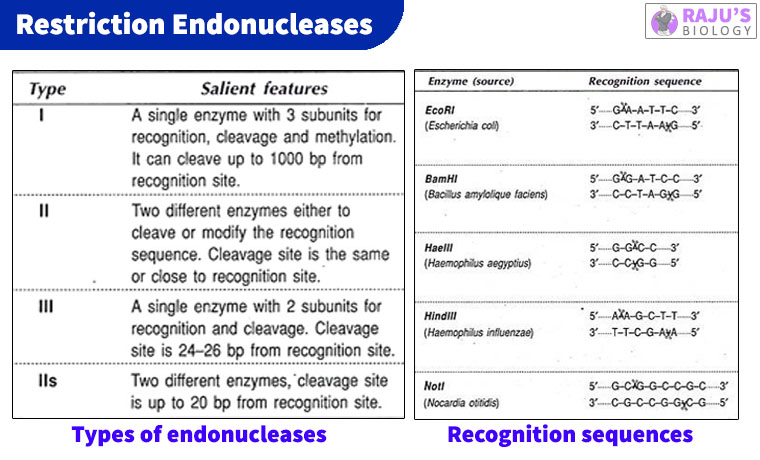 The cut DNA fragments are joined together by DNA ligases. These enzymes were originally isolated from viruses. They also occur in E.coli and eukaryotic cells. DNA ligases actively participated in cellular DNA repair process.

Alkaline phosphatase is an enzyme involved in the removal of phosphate groups. This enzyme is useful to prevent the unwanted ligation of DNA molecules which is a frequent problem encountered in cloning experiments. When the linear vector plasmid DNA is treated with alkaline phosphatase, the 5′-terminal phosphate is removed. This prevents both re-circularization and plasmid DNA dimer formation. It is now possible to insert the foreign DNA through the participation of DNA ligase.

Vectors are the DNA molecules, which can carry a foreign DNA fragment to be cloned. They are self- replicating in an appropriate host cell. The most important vectors are plasmids, bacteriophages, cosmids and phasmids.

Characteristics of an ideal vector

Plasmids are extra chromosomal, double- stranded, circular, self-replicating DNA molecules. Almost all the bacteria have plasmids containing a low copy number (1-4 per cell) or a high copy number (10-100 per cell). The size of the plasmids varies from 1 to 500 kb. Usually, plasmids contribute to about 0.5 to 5.0% of the total DNA of bacteria

pBR322 of E.coli is the most popular and widely used plasmid vector, and is appropriately regarded as the parent or grandparent of several other vectors. pBR322 has a DNA sequence of 4,361 bp. It carries genes resistance for ampicillin (Ampr) and tetracycline (TeIr) that serve as markers for the identification of clones carrying plasmids. The plasmid have recognition sites for the action of restriction endonucleases such as EcoRI, Hindlll and BamHI

The other plasmids employed as cloning vectors include pUC19 (2,686 bp, with ampicillin resistance gene) and derivatives of pBR322, pBR325, pBR328 and pBR329.

Bacteriophages or simply phages are the viruses that replicate within the bacteria. In case of certain phages, their DNA gets incorporated into the bacterial chromosome and remains there permanently. The advantage with phages is that they can take up larger DNA segments than plasmids. Hence phage vectors are preferred for working with genomes of human cells.

Phage λ and M13 phage are bacteriophage vectors are used in transfer genetic materials to bacteria.

Cosmids are hybrid vectors, they have characteristics of both plasmid and bacteriophage λ. Cosmids can be constructed by adding a fragment of phage λ DNA including cos site, to plasmids. The recombinant DNA so formed can be packed as phages and injected into E.coli . Once inside the host cell, cosmids behave just like plasmids and replicate. The advantage with cosmids is that they can carry larger fragments of foreign DNA compared to plasmids.

Introduced in 1987 by M. Olson, yeast artificial chromosome (YAC) is a synthetic DNA that can accept large fragments of foreign DNA (particularly human DNA). It is thus possible to clone large DNA pieces by using yeast artificial chromosome. YAC are the most sophisticated yeast vectors, and represent the largest capacity vectors available. They possess centromeric and telomeric regions, and therefore the recombinant DNA can be maintained like a yeast chromosome.

The construction of BACs is based on one F-plasmid which is larger than the other plasmids used as cloning vectors. Bacterial artificial chromosomes can accept more than 300 kb of DNA fragments . The advantage with bacterial artificial chromosome is that the instability problems of YACs can be avoided. In fact, a major part of the sequencing of human genome has been accomplished by using a library of BAC recombinant.

The hosts are the living cells in which the carrier of rDNA molecule or vector can be propagated. There are different types of host cells i) Prokaryotic cells (bacteria) ii) Eukaryotic cells (fungi, animals and plants)

The bacterium, Escherichia coli was the first organism used in the DNA technology experiments and continues to be the host of choice by many workers. Undoubtedly, E.coli, the simplest Gram negative bacterium (a common bacterium of human and animal intestine), has played a key role in the development of present day biotechnology.

Under suitable environment, E.coli can double in number every 20 minutes. Thus, as the bacteria multiply, their plasmids (along with foreign DNA) also multiply to produce millions of copies, referred to as colony or in short clone. The term clone is broadly used to a mass of cells, organisms or genes that are produced by multiplication of a single cell, organism or gene.

Bacillus subtilis is a rod shaped non-pathogenic bacterium. It has been used as a host in industry for the production of enzymes, antibiotics, insecticides etc. Some workers consider B.subtilis as an alternative to E.coli.

Eukaryotic organisms are preferred to produce human proteins since these hosts with complex structure (with distinct organelles) are more suitable to synthesize complex proteins. The most commonly used eukaryotic organism is the yeast, Saccharomyces cerevisiae. It is a non-pathogenic organism routinely used in brewing and baking industry. Certain fungi have also been used in gene cloning experiments.

Despite the practical difficulties to work with and high cost factor, mammalian cells (such as mouse cells) are also employed as hosts. The advantage is that certain complex proteins which cannot be synthesized by bacteria can be produced by mammalian cells e.g. tissue plasminogen activator. This is mainly because the mammalian cells possess the machinery to modify the protein to its final form (post-translational modifications).

It may be noted here that the gene manipulation experiments in higher animals and plants are usually carried out to alter the genetic makeup of the organism to create transgenic animals and transgenic plants rather than to isolate genes for producing specific proteins.