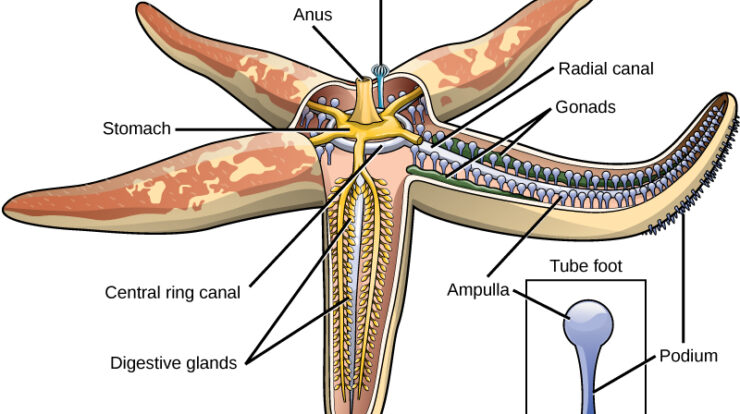 In this article we will discuss about Water vascular system in Echinoderms.

Water Vascular System It is otherwise called the ambulacral system. It is peculiar to echinoderms and not present in any other animal group. It plays most vital role in the locomotion of the animals & comprises madreporite stone canal, ring canal, radial canal, Tiedman’s body, lateral canals & tube feet.

The water vascular system is a modified part of coelom and is a system of canals filled with a fluid consisting of sea-water and certain corpuscles. The essential parts of the system are the madreporite, stone canal, ring canal, radial canals, Tiedmann’s bodies, pollen vesicles, lateral canals and tube feet.

I. Madreporite: It is a hard rounded and calcareous plate lying on the aboral sur-face. It is situated in the inter radial position. The surface of the madreporite is provided with a number of radiating grooves or furrows. The bottom of these furrows are perforated by minute pores, so that the whole plate looks like a sieve. Each pore leads into a pore-canal and all the pore canals merge into collecting canals. The collecting canals converge into a small bag-like ampulla beneath the ma-reporite. The ampulla opens into a stone canal.

2. Stone Canal: It is an S-shaped canal. The walls are strengthened by a series of calcareous rings and hence the name. Internally the stone canal is lined with cilia, the movement of which draws the sea-water from outside into the canal. One end of the tube opens to the outside through the madreporite. The other end opens into a ring canal. The lumen of the stone canal is occupied by a ridge with spindly coiled lamellae.

3.Ring canal: It is a wide pentagonal ring-like vessel lying around the mouth.

5. Pollan Vesicles: The ring canal on its outer side five pear-shaped str ucture called pollen vesicles. They are inter radially arranged. These are thin walled bladders with long and narrow necks. The polian vescicle serve as store houses for the fluid in the vascular system.

6. Radial Canals: From its outer surface the ring canal gives off five radial canals one entering each arm. The radial canal runs upto the tip of the arm and ends in the tentacle.

7. Lateral Canals: Each radial canal gives off many paired lateral canals on both the sides, which lead to a tube foot or podium. Each canal is provided with a valve to prevent backward flow of fluid into the radial canal

8. Tube Feet: The tube-foot is a hollow elastic thin walled closed cylinder. It consists of an upper sac-like ampulla, a middle – podium and a terminal disc-like sucker.Muscle fibres are present in the walls of the ampulla and the podium. The tubefeet are capable of greater extension and when extended they come out through the ambulacral grooves. Functions of the Water Vascular System The water vascular system has three main functions. They are as follows: I. Locomotion, 2. Food capture and 3. Attachment

Functions of the Water Vascular System

2. Food capture: The tube-feet are used to capture the prey. The suckers are used to open the shells of molluscs.

3. Attachment: The star fish can be attached to the rocks by the tube feet.